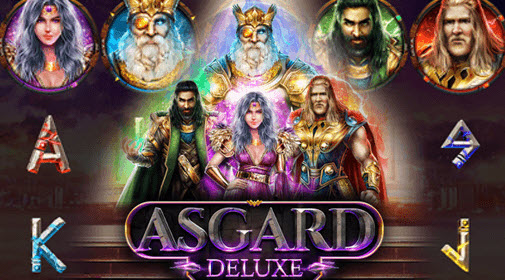 Unleash the gods' wrath and be a legend of the Vikings in this very much anticipated Asgard sequel – the Asgard Deluxe game. You're being awaited by Odun at the Valhalla gates to greet you regarding your Asgardian mission. Are you going to prevail or will you join in the fall?

Asgard Deluxe slot is a sequel to the very much popular release of 2017, Asgard slot. This is a mythical adventure that explores the Norse Gods Loki, Freya, Thor, and Odin tales. Played in a majestic Valhalla hall, this new Asgard slot series chapter explores each mythical God power.

This is the last chapter in the series of Asgard slots powered by RTG. It is a five-reel modern slot machine that offers a total of 243 pay lines and the highest price award of 2000 times the bet of a player. Players who want to enjoy this game can play it on our website anywhere and anytime with our multi-device casino library.

Players of every slot level will appreciate all the experiences that Asgard Deluxe has to offer. The bets range from USD0.25 and USD75, which creates the chances for an array of payout chances.

In Asgard Deluxe, you'll not find just one but as many as four features filled with action. When you unlock the feature, gamblers will be able to select the Norse god they love to show several feature prizes.

All players will have the ability to trigger the game's pick feature when they reveal 3+ scatter symbols on any part of the trend. Every feature will allow players to win some more payouts and also expand their adventure on the Asgard slot.