All Aboard Slot Review (Rival) 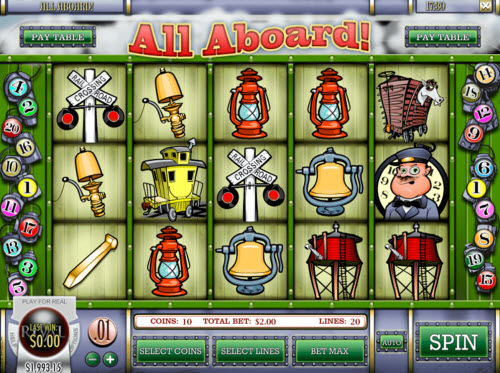 >Play on All Aboard Slot

There are four icons that can be landed by the players that will increase their winnings with each of them having its own uses. One of them is the wild which will showcase on wheels one and two. Then they will increase in size till the whole wheels have been covered. The wilds will also substitute for all other icons on the wheels. When the players land the scatter icon they will receive about one thousand and six hundred coins. The bonus session will be activated by landing the bonus icon which is Casey Jones. Landing three of such icons will give ten spins for free and a multiplier of two. Landing four icons will give twenty spins for free and a multiplier of three. Landing five icons will give forty free spins and a multiplier of four. Another bonus icon is the bonus bell that will activated the bonus session for locating at least three of such icons. Nine boxes will be displayed for you to select one and be awarded immediately.