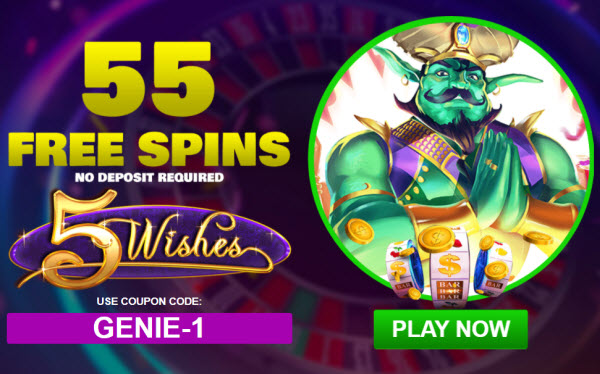 5 wishes slot is a new slot game created by real time gaming which is now famous in the gaming world among players. It is made up of five wheels and twenty five bet lines. It contain wild icons, scatter icons, and free spin session. It also contain 2 continuous jackpots that can be activated by the icons mentioned above. Without the jackpot the players can still go away with about five thousand times their bets which is also a significant win.

The minimum amount required when playing the game for one spin is 0.25 dollars whereas the maximum is 25.25 dollars. The value of the coin is the only the thing that undergo changes. The benefits giving to the players is amazing and a lot of opportunities are provided for the players to win the jackpot prize. There are two random jackpots available that can be activated by the slot with the main jackpot beginning from 250 dollars and the other one 1000 dollars. Also without the jackpots, players can attain a cash out of five thousand times their bets at the end which is obviously good. It is a high volatile game therefore to win big there is a cost attached and players need to take more risks if they want to leave with massive winnings.

5 wishes slot contain wild icons which can replaced all other icons present to form winning combo. However, the problem players’ encounter with the wild is the inability to appear at any other position on the wheel except number one. An amazing benefits included with the wild is it also contributes multipliers of times two the player winnings after replacing all other icons and formed winning combinations.

The appearance of the wild can lead on the first wheel can lead to the transformation of other icons into additional wilds. Aladdin, monkey, or the girl are examples of icons that can be transformed into extra wilds.

The game is made up of fantastic graphics and designs. The theme of the game is based on the appearance of a genie that will grant people their wishes. According to the gameplay of this game, the genie will grant five wishes of the players which can also be deduced from the slot name. Mysterious lamp, monkey, the girl, Aladdin and the genie are among the icons of higher values whereas the royals are the icons with low values.

It is a high volatile game which means players can go away with a massive prizes. It also have two jackpots that can be activated with one hundred free spins. The graphics, designs and the theme of the game is also appealing to the majority of players.