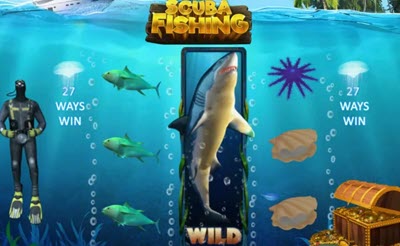 Do you want to play an amazing online slot game? This review of Scuba Fishing Slot game by Realtime Gaming contains all the information you need to know about the game.

In the depths of the sea, one may come across a wide range of living creatures. Although we are deterred from appreciating the abyss to its full by the notion that we might encounter something unpleasant, this online slot does not appear threatening; instead, it seems inviting!

A game based on the theme mentioned above was released by Realtime Gaming, the top software company. They've given it their own spin, and while it has basic gameplay for novices and folks who dislike complicated rules, it nevertheless possesses its appeal.

The whole backdrop is quite beautiful. It includes 3D elements that help the environment to come alive. An undersea realm filled with living creatures and activities lies beneath the yacht and island, which is full of palms.

The waters are so clear that they appear to be the picture-perfect vacation spot. On the left corner, you may see the scuba diver in his or her full suit. A shark may be seen on the left swimming towards the screen and then returning to deep-sea regions on occasion. There is a school of fish on one side, as well as two jellyfishes, with one on either end and near the bottom. There are various types of corals, rock formations, seagrass, and other items surrounding it. A star adorns the sky.

Bubbles separate the reels, which are outlined by treasure chests that float towards the surface and back.

Both the cast and the plot are pretty creative. The unique wild icon is a shark, the exact fish that may be seen as it swims in the backdrop, which can completely fill out the center reel. A swordfish, a pufferfish, a yellowfin tuna, a clam, a sea anemone, an urchin, sets of corals, and a red and blue fishy make up the typical cast of characters.

There are twenty-seven win lines in total, and the design is made up of three rows and three reels. The highest bet amount allowed is $100, whereas the minimum bet amount is $0.20. The swordfish was declared the most rewarding character. Next is the tuna, while the coral and anemone were designated as the lowest.

The Autoplay option is equally included. The number of spins may be selected from the available choices, or the automatic rounds will stop when the feature is triggered, as with this mobile-friendly setup!

Features of the Slot

This game is excellent for those who are starting out because it's simple to pick up and play. Realtime Gaming took steps to ensure that the functions offered, while not numerous, would be intriguing and enjoyable.

The wild icon may only be found on the center reel, and it is utilized to replace all other symbols. When three or more of them are assembled together, the re-spin function is activated! The first and third reels will re-spin while it remains in the center. They also feature a blank icon as well as one that is randomly chosen.

Overall, the reviews are favorable. The game design, as well as gameplay, are entertaining enough to pique people's interest, so we have to recommend it even if it's once while hoping for good fortune.